Victory and Beyond History Books
for sale for $125.00 each. Pick up your copy at the Coop or Prentice Foods. If you’re from out of town we can mail them out COD. Please contact Leah at mlmringrose@sasktel.net for that option.

The Village of Beechy is located 48 kilometers east of Kyle on highway #342. It is snuggled on the north side hills of a flat valley floor. The west end of the valley is the beginning of the Snakebite Coulee that drains all the flat land and ends its life in the South Saskatchewan River. Beechy is 18 kilometers north of the shore of Lake Diefenbaker, the lake that was formed by the construction of the Gardiner Dam.

The village sits in an area shaped by the elbow of the river. This part of the world was surveyed in the 1890s, and it wasn’t settled until much later when the homesteaders moved in.The ranchers came first. Robert Cruickshank has been acknowledged as the first Beechy District settler. At the turn of the last century, Cruickshank acquired 50,000 acres of lease on the Beechy side of the water where he set up a home for his family.

The first plow furrows were not turned until approximately from 1910 on. One young homesteader, struggling to guide his one-bottom plow behind oxen, through sand and buckbrush, was watched by a local cowboy and was offered this sage advice: “By Gawd boy, why don’t you buy a cow and watch her grow!”

By 1910 and 11 many settlers came into the area looking for land and a new life. They came from England, Scotland, Norway, Sweden, Russia, Germany, Ireland, Finland, Luxembourg and France, many by way of the United States, as word came out that there was still open land to be obtained. At first the settlers hauled grain and produce either north to Wiseton, a two-day trip, or more, or to the south across the river, a hazardous journey that took three days at best. The district needed a central market.

In 1919, in this valley, bordered by the Coteau Hills range, was a place surveyed by the Canadian National Railroad and known as Mile 55, the end of the steel. The land was part of the Neal Oliver Sr. land. Because of the growing population and volume of supplies that were needed, and the mass production of grain that was being grown in the virgin soil in such a few short years, the government could see that Mile 55 would be an excellent spot for a central market place. Work on the railroad commenced in 1920, starting from where the line had left off at Dunblane, coming through the hamlet of Demaine to Beechy.

With the news of a railroad came the first merchants who set up a hardware store and a blacksmith shop. The population of the fledgling town consisted of these two men until 1920 when the first merchant brought in his wife and two children. Other businessmen followed and now it was time to have a town survey. The first four blocks were measured out and the hardware store was on Lot #1, Block #1 on the corner of Railway Avenue and Main Street. The corner at the other end was chosen for the general store. In between these two shops, there was another general store, hotel, and meat market. A third general store, pool hall, and hardware store made up the first block of Main Street.

As the hamlet grew, two restaurants, two livery stables, a garage and farm implement agency, and a lumberyard were added. By the summer of 1921 the railroad was definitely a reality. On December 21, 1921, the train came puffing in to stop at the temporary station, a box car.

The early post offices were established in school districts. These mail points were operated out of the settlers’ homes, or little country stores. Mail was transported from Herbert, crossing the river by mule team and wagon twice a week, regardless of the sometimes less than desirable weather conditions. When the railroad was completed, the CNR took over the mail-hauling contract for delivery to Beechy, with locals contracted to further deliver the mail to the rural routes, a practice discontinued in the mid fifties.

With the growth of population follows a very real need for health care. Initially, homesteaders’ wives served as midwives and caregivers. In 1924, the R. M. of Victory #226 was petitioned to pass a buy-law that would enable the municipality to hire a practitioner.

Our first hospital was in a private home which had two extra rooms built on for wards. The building carried on as a medical center until 1966 when the new Beechy Union Hospital, an eight-bed facility, was opened. Due to economics and decline in the population, our hospital was closed by the reigning government in 1991. This caused dismay and anxiety for the people; even though the population had lessened, the mileage to the nearest hospital had not. To the credit, courage and hours of volunteer work and dollars, the RM and village now maintain an ambulance. The deserted hospital has been turned into a clinic with a doctor and staff. There is a trained paramedic and first responders staffing the ambulance service.

Spiritual needs had been taken care of with individual church groups in the outlying rural area in private homes. With the growth of the town, it was time for the churches to grow too and the four churches include Anglican, Roman Catholic, United and Christian Fellowship.

In 1922 the first grain elevator was built. Prior to that, individuals had set up open bins to accept grain. Several grain companies operated in the area over the years. Now, in the new century, the prairie giants have disappeared from Beechy. A new marketing facility, West Central Road and Rail, was established in 2003.

When the population reached the required 100 permanent residents, plans were made to organize a village status. That occurred in 1925. The Council could now pass and carry out their own bylaws. Thus it was that a dog tax was levied, streets were improved and sidewalks along Main Street were built.

Electricity came to the village in 1926 by way of a light plant. Service was offered from sundown to sun-up, and Monday mornings so the women of the village could do the washing. Then a 24-hour service was established and continued until 1951 when the Saskatchewan Power Corporation took over. Residents could now indulge in some of the modern 110 A.C. conveniences.

With the arrival of the railroad came the telegraph. Some rural areas had telephone services with barbwire fences being connected together from one farm to another and using radio speakers and headphones. A rural telephone company was organized and continued until 1968 when the Saskatchewan Government took over the telephones.

Although times may have been hard, on the average, the population was a young one and there was time for fun and recreation as well as work. One of the first baseball teams in the district was organized in 1911. War and hard times such as the depression of the thirties interfered with the team roster. As time marched on, the sport was never lost and Beechy still fields a team today, the Beechy Breakers.

The first organized hockey game was played in 1935-36, with a pick-up of players from Demaine rivaling a pick-up of players from Beechy. They played on open-air rinks or frozen sloughs. By 1941, the entire team had joined the forces. After the war, hockey was resumed and the Beechy Bombers team was born. Minor hockey was organized and sponsored by the Beechy Legion in the early fifties.

Beechy’s first indoor skating rink was built in 1952 with limited funds, volunteer labour and a lot of community spirit. Since then, two more rinks have evolved. And that same cooperative spirit maintains and operates a modern artificial ice skating rink and a three sheet ice surface curling rink. In 2000, the new Beechy Community Hall became a reality, replacing the former Legion Hall that had served many years of dances, banquets, wedding receptions and other functions requiring space for gatherings of more than twenty people.

In 1948, the Village Council built a racetrack and the first harness horse race meet was held in 1949. The track was registered with the Standardbred Racing Association in 1950, and pari-mutual betting was licensed. For many years, the dirt track supplied excitement and a welcome addition to Sports Day. Later, the little track was shut down to registered racing, and was used for training by local horse owners.

The first agricultural fair was held one mile south of the village in August of 1922. In 1936 the Victory Agricultural Society was organized and was granted its charter in 1945. The society has sponsored many projects besides the fair through the years: machinery demos, Baby Beef Club, orchard project, field days, summer fallow contest, seed fair and standing crop competition, shelter belt planting and community rink. The society erected a fair building on the Memorial Sports Grounds in 1954. The Multiple 4-H Club continues to thrive.

The Village of Beechy and surrounding R.M. of Victory #226 has seen many changes of seasons, generations of people, most of one century and into a new one. The area remains a land of opportunity and an abundance of optimism. The pioneer spirit was, and still is, alive and well. 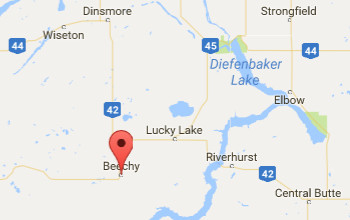 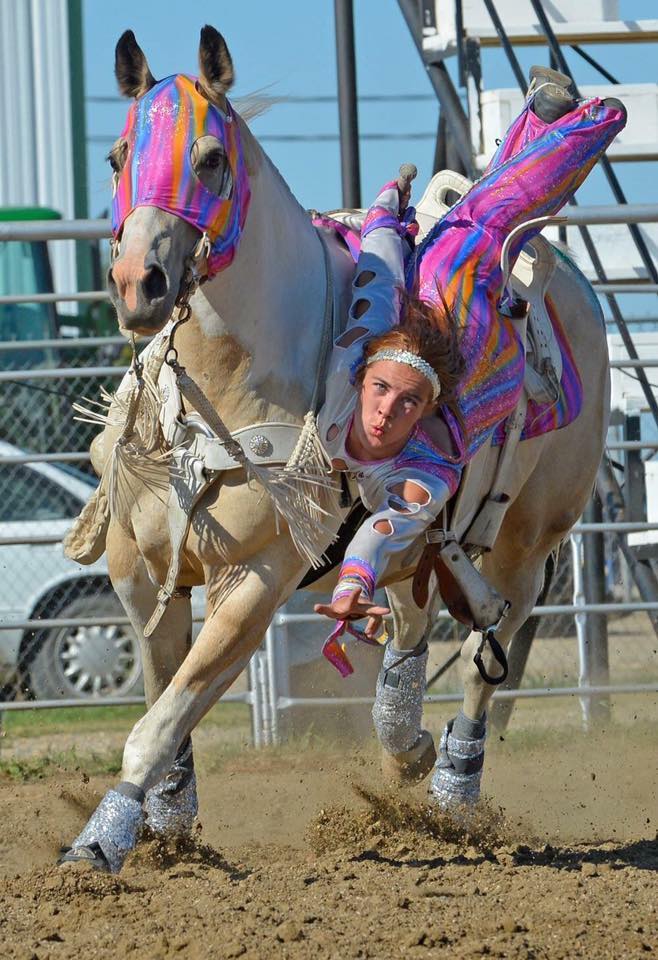